Open letter to actor Gerard Depardieu from Vladimir Gridin, leader of the Mordovia branch of YABLOKO

In connection with your plans to settle in Mordovia, let me ask you a few questions as so to say your new compatriot.

1. A few days ago you visited Mordovia and, as you put it, you were stunned by the hospitality shown to you there. Vladimir Volkov, President of the Republic of Mordovia, offered you in a handsome gesture an apartment or a plot of land under a house. The generosity of the head of the region struck  many people in  the republic, especially the residents of Tambovskaya street in Saransk.

Do you know that this street is located close to the monument to Yemelyan Pugachev you were taken to see? Dozens of families had been living there in their private houses for years until the brother of the President of Mordovia put an eye on this plot of land. After trials in the controlled courts these families were deprived of their property titles and were unable to buy new housing with the compensation [assigned to them by the courts’ decisions]. Also there are many people enlisted in the housing queues in Mordovia (low income families, families with many children, handicapped, etc), they have been waiting for years to get from the state the housing they must get in accordance with the law. According to media reports, the head of the Republic donates you an apartment in one of the new apartment blocks in Saransk.

Here comes my first question. Do you think it is possible to accept such a gift taken away from one of these unfortunate Saransk families?

2. In a letter to Channel 1 you called modern Russia a "great democracy". Do you know that the party of your friend Vladimir Putin obtained 104 per cent of the vote in the Republic of Mordovia in the parliamentary elections of 2007?

And here comes one more question in terms of clarification: Do you think that the greatness of a democracy is measured by the amount of votes obtained by the ruling party at the elections?

3. In Russia people associate the decision of President Putin to grant you citizenship and the fuss around it in the state-owned media with the desire of the government to divert public attention from the “Anti-Magnitsky law” which has come into force. You probably know that Russia has adopted this law prohibiting to Americans to adopt Russian children in response to the U.S. entry ban for the persons responsible for the murder of Sergei Magnitsky.

And here comes my third question. Could you, as a Russian citizen, tell us about your attitude to this law the Russian society is so concerned about?

With a great respect for your talent,

Vladimir Gridin,
Chairman of the Mordovia branch of the YABLOKO party 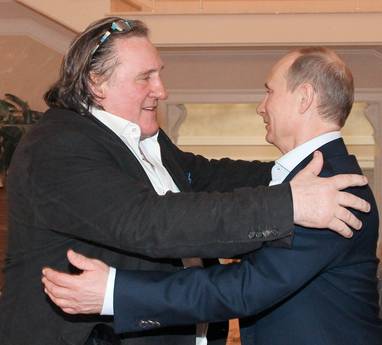